There’s little I can say about the Mt. Hagen Show in the highlands of Papua New Guinea that would get remotely close to depicting the experience of being there. In a nutshell, I was in the middle of what felt like an old National Geographic documentary. Thousands of miles away from what we call civilization, plenty of body paint, leaf skirts, chanting to the rhythm of the home-made drums, synchronized movements of the hips. Beyond the nutshell, the festival is a way of bringing peace to tribes otherwise used to resorting to the machete for conflict resolution. 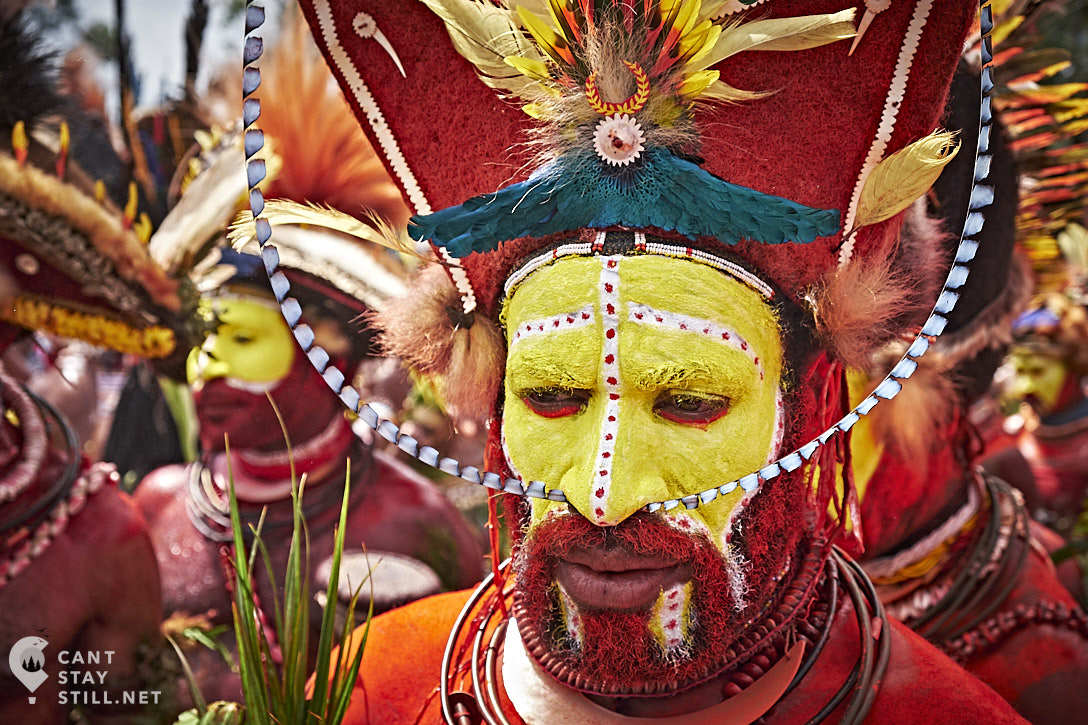 the Taris are known to have a short fuse; at the show they were singing, but not smiling too much

Some tribes arrived at the show ready for the party. They came with the truck having all the facepaint, outfits and headpieces in place. Others were on the festival grounds hours early to get ready at the location. Some were applying face paint, others were assembling the headpieces or lathering themselves in vegetal oil to make the skin shine. I was mesmerized by the headdresses. On a base of moss in a knitted cap, feathers or even preserved hole birds wer placed craftily to create the look for their tribe. I’ve seen different types of parrots and birds of paradise. When not worn, the feathers and birds are stored individually wrapped in newspaper.

The show itself was set on what looked like a rugby field. The participants would prepare in an area outside the field and when it was their turn they would join a queue of singing and dancing groups making their way towards the entrance and then around the perimeter of the field. After arriving in front of the main tribune (where the officials sat), they would find a spot on the field where they would continue their performance.

What you find here